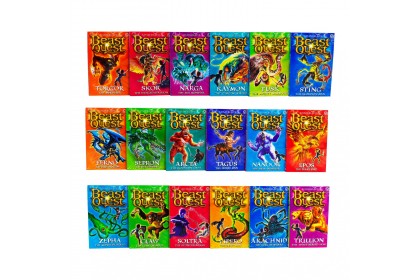 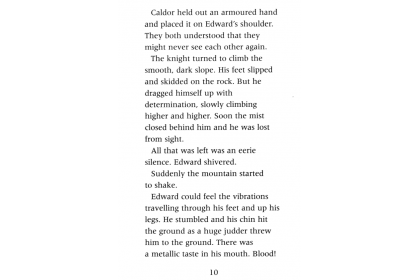 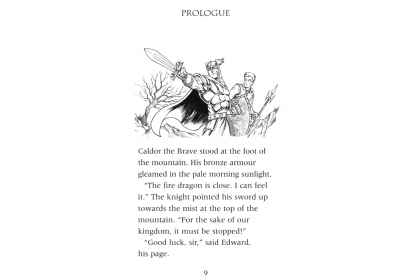 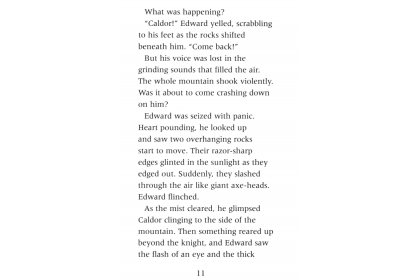 Beast Quest: Ferno
An evil wizard has enchanted the magical beasts of Avantia - only a true hero can free the beasts and stop them from destroying the land. Is Tom the hero Avantia has been waiting for? Join Tom as he braves Ferno the fire dragon

Beast Quest: Sepron
Avantia is under threat from its magical Beasts, which have been enchanted by an evil wizard. To save his land and his people, Tom must battle Sepron the Sea Serpent in the depths of the ocean - will he succeed?

Beast Quest: Arcta
Tom must free the magical beasts of Avantia from an evil spell. Armed with a sword and shield from the Wizard Aduro, Tom sets off to face Arcta the mountain giant. Can Tom save his land from destruction

Beast Quest: Tagus
Avantia needs a hero. Under the spell of an evil wizard, the magical beasts that once protected the land are destroying it. Tagus the horse-man is terrorising the people and animals in the plains - can Tom stop him

Beast Quest: Nanook
The magical Beasts of Avantia are under the power of an evil wizard. Tom journeys to the wilds of the frozen north, searching for Nanook the snow monster

Beast Quest: Epos
An evil wizard is using Avantia's magical Beasts to destroy the land. Epos the Flame Bird is said to be the most terrifying of the Beasts - can Tom free her from her enchantment and save Avantia

Beast Quest: Zepha
The Evil Wizard Malvel has stolen the magical suit of golden armour and scattered it throughout Avantia. Tom vows to find the pieces - but they are guarded by six terrifying new Beasts! Will Tom survive an underwater battle with Zepha the Monster Squid and collect the first piece of armour

Beast Quest: Claw
Avantia is under threat from an evil wizard. To save the kingdom, Tom must defeat six terrifying Beasts and collect the pieces of magical golden armour. Join Tom as he journeys into the Dark Jungle to do battle with Claw the Giant Monkey..

Beast Quest: Soltra
Tom's quest to collect the golden armour takes him to his home village, which is being terrorised by Soltra the Stone Charmer. Can he defeat the fearsome Beast and free the frightened villagers? Or will he join her victims and be turned to stone himself

Beast Quest: Vipero
The evil wizard Malvel has stolen the golden armour and a fearsome new Beast guards each piece of it. To defeat Malvel and save the kingdom, Tom needs to collect all the pieces. Join Tom as he journeys into the deadly heat of the desert, where he must do battle with Vipero the Snake Man...

Beast Quest: Arachnid
In the caves of Avantia lurks Arachnid the King of Spiders. Massive and terrifying, Arachnid preys on the local townspeople and guards a piece of the magical golden armour. Can Tom defeat the Beast and save the kingdom from destruction?

Beast Quest: Trillion
The peace of Avantia has been shattered by a fearsome new Beast - Trillion the Three-Headed Lion. If he is to save the kingdom, Tom must defeat Trillion and collect all the pieces of magical golden armour. Will he succeed

Beast Quest: Torgor
The Minotaur The good Beasts of Avantia are in danger. They have been captured by six terrible new Beasts and taken to Gorgonia, kingdom of the evil wizard Malvel. To free the beasts, Tom journeys into the sinister Dark Realm, where he must first face Torgor the Minotaur...

Beast Quest: Skor
The Winged Stallion The Dark Wizard has sent six fearsome Beasts to capture the good beasts of Avantia. They are imprisoned in the Dark Realm, and it is Tom's quest to save them. He and his companions must undertake a perilous journey and defeat Skor the Winged Stallion.

Beast Quest: Narga
The Sea Monster In the perilous Black Ocean lurks Narga the Sea Monster. As well as preying on the rebels fighting evil wizard Malvel, Narga is holding one of the good Beasts of Avantia captive. Can Tom set the good Beast free, or will it remain trapped in the Dark Realm for ever?

Beast Quest: Tusk
The Mighty Mammoth Tusk the Mighty Mammoth rules the rotting forests of Gorgonia. She terrorises the rebels at war with evil wizard Malvel and holds a good Beast captive. All the good Beasts are imprisoned and Tom must save them. Will he defeat Tusk before Malvel's guards track him down?

Beast Quest: Sting
The Scorpion Man The good Beasts of Avantia are imprisoned in the kingdom of Malvel, an evil wizard. Each is guarded by a terrible new Beast. Tom's quest to free the good Beasts takes him to the tunnels under Malvel's castle, where Sting the Scorpion Man is waiting.